By 6pm last night, 1737 home sales worth $922.39 million had been reported to the Real Estate Institute of Victoria.

And the REIV is confident home buyers will crack the golden $1 billion sales mark today after 87 late results are tallied.

But while homeowners wanting to sell may be buoyed by this week's sales bonanza, buyers will be disheartened by new evidence of rampant underquoting in all price ranges.

An investigation of 12 homes going to auction on Saturday exposed 50 per cent of these homes had sales campaigns with misleading quoting.

Some had reserve prices - the price a vendor will sell for - set tens of thousands higher than advertised prices.

Buyers in the lower end of the market were also stung, with a home in Glenroy, previously quoted at $380,000, still not on the market after frustrated bidders reached $420,000.

The highest bidder was confused when told the property had been passed in.

David McRae, of McRae Property Buyer Advocates, said the underquoting spree was "not on".

"That type of underquoting is totally inexcusable," he said.

"It's black and white and it's blatant. (Underquoting) definitely still happens."

The Sunday Herald Sun's shocking findings follow news last month that the Federal Government's plan to fine homeowners up to $220,000 for advertising below genuine sale prices has stalled and will not roll out on January 1 as promised.

The proposed changes to property laws could have seen offending real estate agents fined up to $1.1 million for misleading advertising.

It is now unclear when tough new underquoting laws will be introduced.

Mr McRae said the record weekend of auctions had little to do with the underquoting rampage.

"The (underquoters) are not going to care if it's a big weekend or a little weekend," Mr McRae said.

He added that many agents doing the right thing are chastised in a strong market that routinely sees reserve prices smashed.

Almost 1100 auctions - more than any other Saturday this year - were booked to go to auction yesterday.

Yesterday's buying frenzy, which saw 81 per cent of 1008 reported auctions sell, is proof that home buyers are desperate to secure properties before the market's seasonal Christmas break.

"The reality is that if they (buyers) do not buy something this week that meets their criteria, they will have to wait until February or March and may not be in their homes until June or July," buyer advocate Melissa Opie said.

And there is little buyer relief in sight, REIV boss Enzo Raimondo said.

"As we head into 2010, it is clear the supply of housing needs to be increased and if it is not, there will continue to be upwards pressure on house prices and rental costs," Mr Raimondo said. 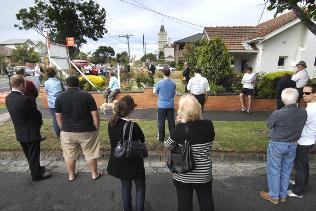