As Melbourne prepares for another bumper auction weekend, buyers will be looking for affordable options.

Buying a less expensive home on a busy street or under a flight path can be a good way to get into a popular area, but each property should be judged on its merits.

With all the talk of a property market going gangbusters – double-digit growth in Sydney and Melbourne for the year to date, heady clearance rates, buyers spooked amid fears of paying more than the market price or missing out – some buyers are being forced to recalibrate their options.

Suddenly properties, particularly those in highly sought-after areas, which perhaps in more sober times might have taken a little more convincing and time to shift, are squarely in buyers’ crosshairs: the house on the main road, under the flight path, beside the block of flats, railway line or tunnel or that drop-dead gorgeous Victorian terrace within earshot of the pub.

The rule of thumb, for both Melbourne and Sydney, is that a property on an arterial road, for example, commands 10 per cent less than if the same house sat one street back. “It’s a good way to get into a suburb you’re looking at, even more so in a period of growth,” he says.

Robert Clements, director of Woodards, on the other hand, believes market conditions don’t matter. He argues that people after value for money and solid returns shouldn’t be put off by a main road or railway line, particularly in inner-city areas where he does business, such as Richmond, South Yarra and Malvern.

“Main roads have larger parcels of land, some of the city’s grander homes and benefits other streets mightn’t enjoy, such as rear access,” Clements says.

It’s not just a means of getting a toehold into a prized suburb at an affordable price. It may be that the house is within walking distance of work, shops or close to other family members. Retiree Andrew Craig bought in busy Hoddle Street in Richmond to be near his daughter and the city centre.

In Melbourne, Balwyn High School is so well regarded that people will snap up houses within the zone regardless of their position, says buyer’s advocate Melissa Opie.

Each property needs to be judged on its individual merits, says Opie, director of Keyhole Property Investments. For instance, a property opposite a railway line in the inner suburb of Kensington sold for $100,000 above the quoted price because it is in a wide street near a cafe and shops with excellent public transport. Similarly, a house in Elwood’s bustling Marine Parade is more than compensated for by the views and proximity to the beach and town.

At the same time, she prefers to steer buyers – investors more so than owner-occupiers – towards properties that might be down at heel on a better street rather than, say, a renovated house in a less than ideal locale. “There’s always a tendency for [main-road houses and the like] to underperform because you can’t change the location,” Opie says.

Sydney buyers’ advocate Rich Harvey agrees. “It might appear a better opportunity because it’s priced lower, but in the long term, you can’t move a property off a main road or [away from] a noisy pub,” says Harvey, chief executive of propertybuyer.com.au. “Don’t just think about entry strategy. Think about your exit as well.”

Forsyth says many buyers are comfortable with the idea of buying on a major road, regarding it as part of the inner-city buzz, or under a flight path, which he argues causes only intermittent disruption.

Making life better: 10 things you can do to reduce noise or screen properties

1. Plant trees and hedges, such as a Neighbour-Be-Gone lilly pilly, either to screen out a block of flats or a railway line or to create a noise barrier against the street

3. Sound-proof front rooms, for example, by adding sound-deadening board or drywall to walls and ceiling

5. Magnetite is a double-glazing product made from PVC that is fitted magnetically over an existing window frame

8. Build a bulky pergola and grow a vine to block prying eyes

Delighted: Sally Health and Jonathan Green near their new home in Fitzroy.

When the time came to downsize after 15 years in the large family home in leafy Hawthorn, Radio National presenter and author Jonathan Green and his wife, publisher Sally Heath, were keen for something smaller, closer to the city.

After finding a double-storey three-bedroom Victorian terrace in Fitzroy that wasn’t “hyper-renovated” but ticked what they wanted, the couple were worried that the pub a couple doors down might be too noisy.

“We did our due diligence [on the property],” says Green, author of The Year My Politics Broke. This entailed hanging around the pub, consulting neighbours and the local council.

“On all fronts, it was reassuring [that noise wasn’t an issue].”

Green says there had been residents’ complaints about noise initially when the pub extended its rear function space, but some acoustic lining was applied to the roof, which solved the problem.

Satisfied, the couple bought the house within the quoted price range of $1.4 million to $1.5 million. A busy road nearby with the distant rumble of trams also didn’t put the couple off the house. Rather, they viewed the nearby Carlton Gardens and vibrant retail strips of Brunswick and Lygon streets as more than compensation.

As Green sees it, it comes with the inner-city turf. “If you’re moving from Hawthorn to Fitzroy, there will obviously be more ambient noise and activity,” he says. 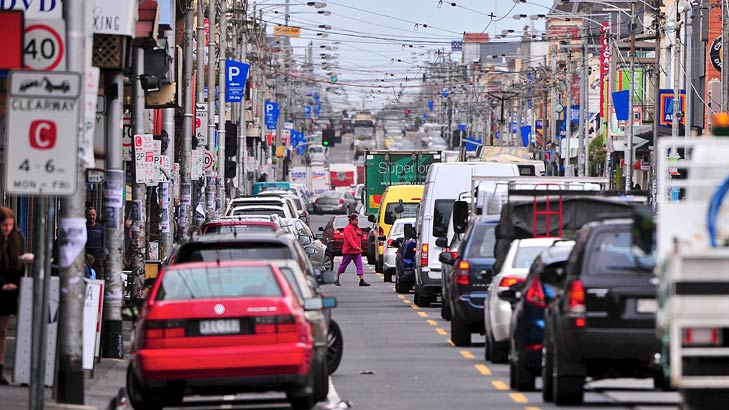