The pot of gold at the end of the property rainbow

Why do some Australians get into financial difficulty when they buy one investment property and yet others manage to own four or five? The answer isn’t simply that they have more money.

Those who succeed at investing in residential property are meticulous about paying attention to detail. They maintain cash reserves to help them survive unexpected jumps in borrowing costs, and thoroughly research the important real estate indicators so they achieve their goals faster and with less hassle.

The pot of gold at the end of the rainbow for people who prefer to sink their savings into bricks and mortar is financial freedom. You want enough rent coming in to live comfortably without working.

How many properties do you need to own to get there? Experts say to generate $100,000 in income a year you need a property portfolio worth $4 million, all of it debt-free.

“It doesn’t really matter how many individual properties you own,” says Melissa Opie, of the Melbourne-based advisory company, Keyhole Property Investments. “What’s more important is the value of the portfolio.

“If you own $1 million worth of unencumbered investment property and the average return on investment is 4.5 per cent, you’ll get $45,000 in rent and income. But the income generated will be less because you need to take into account agents’ commission, your rates and maintaining the property.

“If someone wants an income of $100,000 – and that’s what a lot of people want to pull out to live comfortably in retirement – they will need $4 million worth of unencumbered property aside from their principal place of residence.”

A return of 2.5 per cent to 3.5 per cent on your money (after costs) is quite mediocre compared to with the high returns that can be achieved by sinking money into other assets. Mining and bank shares and money held in an online cash management account can all perform better, but it’s important to note that much of the value of residential property is derived from the returns from capital growth, not from the annual rental returns.

As a long-term investment, residential property is relatively consistent. Studies of Australia’s capital city real estate markets by AMP Capital Investors and other researchers indicate that the value of residential property has increased by 11 per cent a year since the 1890s.

Smart investors take advantage of this rolled-gold growth trajectory. They acknowledge that house prices don’t go up in an even or consistent way, and that there may be a four or five-year period where prices fall or don’t move.

But by following the phases of the property cycle – boom, bust, recovery and stabilisation – they build up a portfolio of properties, and sell one of them when the market has moved up a level. These investors typically use the money from that sale to pay down debt on the other properties so they end up with a debt-free portfolio.

Adviser Richard Wakelin, of Wakelin Property Advisory, says this approach is favoured by investors as they approach retirement and want to work less.

“The process that we advise our clients to follow is ‘buy, hold, and never sell’ – and then repeat the process,” he says. “Of course, people’s lives do change along the way.”

Mr Wakelin says investors who hold several properties tend to be people who don’t get caught up in fads and fashion, such as buying yet-to-be-built apartments off the plan.

“They stay on the road and hold on,” he says. “Property investing is a long-term journey and it’s about not being distracted.”

He says there is finite unit stock and infinite stock. “We are only interested in the finite sector. These are units which have a seriously high notional land component attached to each unit, such as with small established blocks of units in the inner suburbs.”

Property is fundamentally about asset selection. It’s great to have the best competitive financing, taxation advice and depreciation allowances and negative gearing, but if you don’t buy the right asset in the first place, you won’t get the returns needed to achieve your goals.

Earlier this month, BIS Shrapnel senior manager Angie Zigomanis warned that investor-grade apartment projects in Docklands, Southbank and the Melbourne CBD had limited growth prospects. Prices for some high-rise units could even go backwards over the next three years because of the large amount of new supply coming on stream, he said.

By contrast, Wakelin director Paul Nugent estimates the values of two-bedroom, single-fronted cottages in such inner suburbs as Carlton, Prahran, Fitzroy and Richmond jumped by nearly $100,000 during 2012 and 2013.

“They are good buying because they still haven’t achieved the prices that the Art Deco flats have,” he says. “Two-bedroom units from the 1970s can be double the size of off-the-plan two-bedroom units. They’re often more than 100 square metres. For a comparable new one, for which you are paying double the price, you will probably get 60 square metres of space.”

Mr Wilson reckons ’70s flats are cool abodes for Generation Y buyers and tenants: “You put in the Flokati rug, get some orange ceramic lamps and lime green furniture, and these flats are really funky.”

Perhaps the hardest thing for fledgling investors is trying to work out if a property is going to generate 5 per cent or 10 per cent annual compound growth. You need to understand the historical performance of particular blocks of units, streets and pockets of suburbs – and it may be worthwhile paying for professional advice.

Crane driver Jason Atkinson says he hates to think what houses and apartments will cost by the time his two children – Miller, 5, and Lexi, 2 – reach adulthood. It’s the fundamental reason he and his wife, Tammy, are investing in residential property.

The Geelong-based couple have moved out of their comfort zone. Instead of buying in their home city, the Atkinsons bought a two-bedroom timber cottage in Seddon in Melbourne’s west for $625,000 in mid-2011.

The house is rented out for $510 a week. Mr Atkinson, 43, has been heartened that the cottage next door in Hamilton Street, Seddon, which is almost a mirror image of his family’s investment property, sold this month for $781,000, some $156,000 more than what he paid three years ago.

In March, the Atkinsons bought a second investment house – this time in Edinburgh Street, Flemington – for $661,000. Both sales were researched by and affected through Flemington-based Keyhole Property Investments, headed by buyers’ advocate Melissa Opie.

Mr Atkinson said he used some of the equity built up in the Seddon house to buy the Flemington house, and both properties are heavily mortgaged.

“We went as high as we could for the first one and the second one because our overall plan is to end up with four properties,” he said. “The next two will probably be units, which will be cheaper. Long term, I aim to sell off the two current houses and hopefully, 10 to 15 years from now, I would near own outright the two that I am yet to buy by selling the two that I currently have.”

He says borrowing $500,000-plus is a big gamble for a young family. The couple chose to use a property adviser because they lead busy lives and wanted to be confident they were buying the right assets.

“We’ve got two young kids, I run karate classes and clubs and my wife works as well,” Mr Atkinson said. “It was too much of a gamble, especially having the two properties, to not get advice. I didn’t want to be stressing about whether I’d made the right decision.” 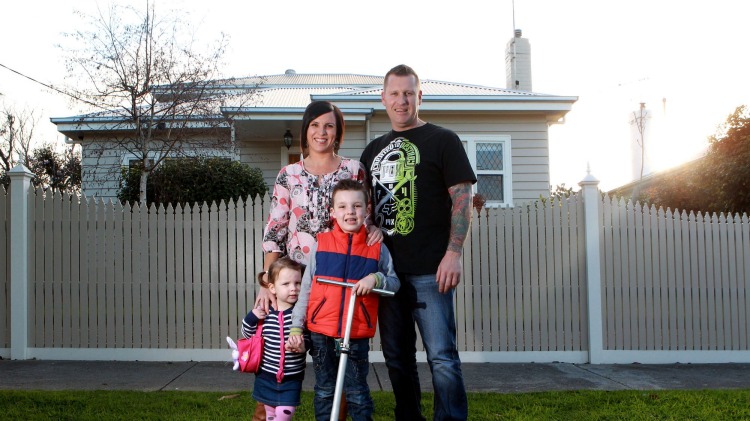