Vendors go to market in numbers

Auctions give analysts hope that recovery phase is well under way.

As vendors gain confidence in Melbourne's residential market, auction sale listings are starting to spike up sharply. New figures from the Real Estate Institute of Victoria suggest buyers and sellers are facing a more crowded market, with 4957 properties put under the hammer between January and the third week of March.

This is 20 per cent up on the 10-year average for January-March listings and well ahead of the 3696 auctions held in the city at this time last year.

The auction market posted another creditable performance yesterday, bolstering claims that Melbourne's housing sector is now in a recovery phase.

The REIV said the clearance rate was 69 per cent for the 821 auction results reported to the industry group. The results of another 98 scheduled sales were not reported.

''The result suggests we are not headed towards clearance rates in the 80 per cent range but, historically, it's a very healthy outcome,'' REIV spokesman Robert Larocca said.

Buyer's advocate Melissa Opie, of Keyhole Property Investments, said the improving sales trend was encouraging vendors who ''were too scared to dispose of assets last year to put them on the market now while the market is not saturated.''

Fletchers sold 15 of 17 properties it auctioned yesterday. Executive chairman Tim Fletcher said: ''People can see there is quality stock coming on and they're deciding to sell.''

He said the market had most likely turned around in September last year.

But inner-city agent Arch Staver, of Nelson Alexander, warned that many B- and C-grade properties were struggling. Typically, these properties are unrenovated, on a main road or close to industrial buildings.

''The only thing that drags up the clearance rate and genuinely creates a bullish market is when the B- and C-grade property rides the growth wave as well,'' Mr Staver said.

''I think we still remain in a discerning market, but in our areas we have more buyers than houses and that is playing in our favour. Even though the B- and C-grades are not getting runaway results, they're still trickling over the line and selling at marginally discounted prices.''

Mr Staver's company sold 36 from 50 auctioned properties. He said nearly all the 14 properties that were passed in attracted genuine bidding.

The rush to list properties can be seen in auction bookings. On March 16, 890 properties are set to be auctioned in Melbourne and a whopping 1140 auctions will be held on March 23. Modest house price growth has been reported by several analyst groups since late 2012 and appears to be reassuring vendors.

Across Australia, house values rose in February by a combined rate of 0.3 per cent, according to the latest figures from RP Data-Rismark. In Melbourne, values were up 1.5 per cent.

Melbourne's inner-city and inner-east areas are notably strong. Both regions notched up an 80 per cent clearance rate last weekend, against a city-wide clearance rate of 72 per cent from 938 auction results reported to the REIV.

The south-east had a clearance rate of 76 per cent, the inner south had 68 per cent, the outer east 73 per cent and the west 61 per cent. Due to the Labour Day holiday, only 200 auctions are scheduled next weekend. 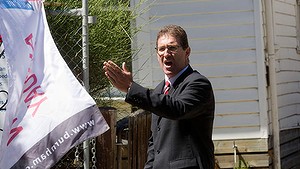